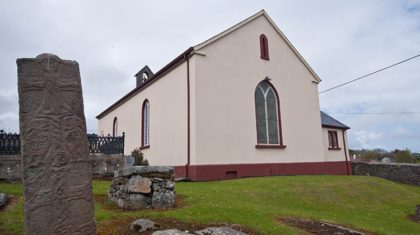 St. Patrick’s Bed is an historic place and the legends tell us that when the Patron Saint visited Inishowen, he came to Carndonagh and said to his followers: ‘If I sleep in peace this night, I shall build my Church on this site.’ So the night passed, St. Patrick slept peacefully, and, as he promised, he built his Church.

The Church of Ireland church, Domhnach Mor Muighe Tachair, is built on the site of the church founded by St. Patrick. The present church was built in 1769 from the ruins of its predecessor, which was largely destroyed in the mid 1600s. The Sacristy and the Vestry Room were added in 1898.

In the churchyard there is a pillar known as the ‘Marigold Stone’. The west face bears a flabellum (a liturgical fan) the head of which is a large circle with a seven petaled marigold inside it.

The church bell is believed to have come from one of the Spanish Armada ships wrecked off the coast of Inishowen, possibly the “Trinidad Valancera” wrecked off Kinnegoe Bay in 1588. Cannons retrieved from this ship bore the same bird engraving as the bell.