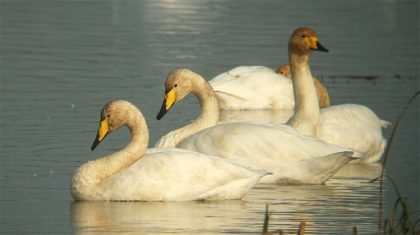 Located some 8km to the south of Buncrana, to the east of Lough Swilly, Inch Wildfowl Reserve is an internationally important destination and staging ground for migrating birds from three continents.

It is, according to the National Parks & Wildlife Service, Ireland’s premier wetland site and designated as a Special Protection Area (SPA) under the EU Birds Directive.

Inch Lake is a man-made lake formed created from the mud of Lough Swilly in the late 19th Century when two embankments were built to link Inch Island to the mainland on behalf of the Derry & Lough Swilly Railway. A railway embankment was then built dividing the area. The inner part (Inch Levels) was further drained to create ‘polders’ or ‘sloblands’ for agricultural use. The outer part (Inch Lough) acted as a holding reservoir or lake for drainage water. Blanket Nook is another area of freshwater formed in the same way to the southwest of Inch near the village of Newtowncunningham.

If you want to get away from it all, why not make use of some of the 8km of idyllic country walks. There are also designated picnic areas to take time out to relax.