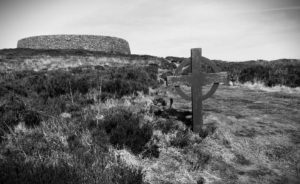 The Grianan of Aileach (Grianán Ailigh in Irish) is a collection of ancient structures 7km west of Derry.  The main structure is a stone ringfort on top of a 250m high hill.  It is visible for miles around and dominates the local landscape.

From the top are breathtaking views of Lough Swilly and the Inishowen Peninsula.  It is thought to have been built by the Uí Néill in the sixth or seventh century AD although the site was probably in use before this. Aileach was inhabited by the northern Ui Néill dynasty from about 789 to 1050.  The wall of the ringfort is about 4.5 metres (15ft) thick and 5 metres (16ft) high.  It is believed that St. Patrick visited here in the 5th century baptising the local chieftain Eoghan.

Grianan of Aileach is relatively easily accessible, with a road allowing you to drive most of the way up and a short walk from the carpark to the fort.