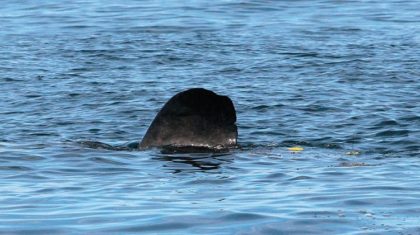 The Inishowen Peninsula is fast being recognised by experts as a hot-spot for the second largest fish in the ocean. These magnificent crea­tures can weigh over 5 tons and can grow up to 10 metres in length.

Basking sharks have long been in the waters off Inishowen. Long before humans colonised the Malin Head area, basking sharks came to feed near its shores. Local folk tales tell of Inishtrahull Sound, north of Malin Head, writhing with sea serpents and a person being able to walk on their backs from the mainland to the island!

In recent years researchers have recorded huge shoals of hundreds of basking sharks in Inishtrahull Sound. Could these spectacular sights form the basis of these old tales?

The first ever written record of a basking shark fishery comes from County Donegal in 1746. Oil taken from the sharks’ liver was a valuable harvest for the whale fishing industry off these local shores.

Basking sharks were hunted off the coast of Donegal until 2006. Nobody knows how many basking sharks are left. They are still hunted outside EU waters for their large fins used in shark fin soup.

Due to their late age of maturity and low birth rate, shark species, including the basking shark, take many years to recover from unsustainable fishing pressure. Accordingly, the basking shark is classed as endangered in the North Atlantic by the International Union for Conservation of Nature.