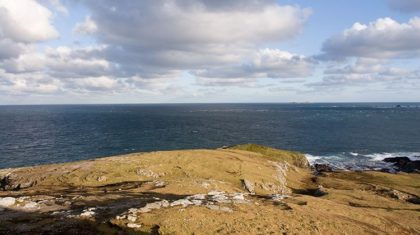 At the top of the Inishowen Peninsula is Ireland’s most northerly point, Malin Head (Cionn Mhálanna). It is 16km north of the village of Malin.

Malin Head  is an area of great scenic beauty and of historical, scientific, cultural and ecological importance. The area is steeped in history and folklore.

The dramatic windswept landscape forms a finger-like projection out into the North Atlantic. The cliffs and rocky shores of Malin Head are the first and last sight of land for ships using the northern transatlantic routes.

At Banba’s Crown, close to the top of Ireland, is a tall, derelict building known locally as “The Tower”. It was constructed in 1805 by the Admiralty, and later used as a Lloyds Signal Station. In its early days the station was an important news link between America and Europe.

A short walk along the cliffs is Hell’s Hole, a subterranean cavern and gorge 75m long and 6m wide, into which the tide rushes with great force. Nearby is a picturesque natural arch called the Devil’s Bridge, spectacular cliffs at Procagh Bens and the sea stacks of Scheildren More and Scheildren Beg. Together these sea stacks and cliffs are important for bird, flora and sea life.

Four levels of shoreline can be seen at Ballyhillin. The land here is rising, leaving behind unique evidence of ancient beaches.

A set of old Coast Guard buildings and a Met Éireann weather station overlook Port Mór – the centre of the community.

Malin Head has an exceptionally mild climate. The average temperature in February is around 7°C, while the average for August, the warmest month, is 14°C.

There are more ocean liners and German U-Boats sunk off Malin Head than anywhere else in the world!